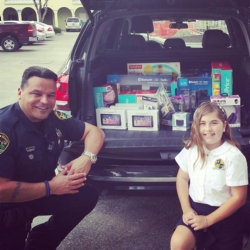 Toys for Tots will benefit
"This is yet another perfect example of what a good Catholic education instills in children. When Lilly was in first grade, she came home from school one day shortly after her birthday telling me that she had learned about all the poor people of the world in religion class. She said she felt sorry for them, and wished that she could help them all. She said she felt bad asking Santa for anything for Christmas because she had realized there was a difference between wanting and needing. She told me that she had everything in the world that she needed, so she felt that it was unfair to ask Santa for what she wanted. That year, she wrote a letter to Santa asking him to bring toys for poor children in lieu of her own gifts. Every year since, she has done the same thing. She normally drops them off at toys for tots, but this year she wanted to give them to the Boynton Beach Police Department after she found out that they were having a local toy drive. Never thought they would post it on their Facebook page! So happy that Lilly is representing SVF in her uniform."